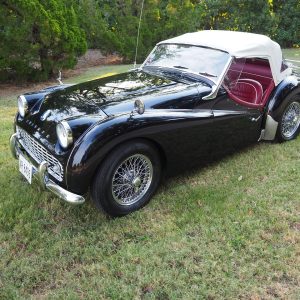 The car spent several years in Pennsylvania before being purchased mid 80’s and moved to Florida. In Florida it was a weekend driver and garaged.
Car was sold in 2006 and moved to Texas. Owner decided to sell as it was the only British car in his collection.
We purchased car in 2007 and the car was driven until 2012 when we decided to do a frame off restoration.

The TR3B was entered in many shows and has won its class several times at the National Vintage Triumph Register conventions. It has won “Best of Show” and Regional class winner. Other shows include class winner in Dallas All European Car Show.

Since then the car has continued to win its class and has been driven. Latest trip was a 1200 mile Dallas to Oklahoma to Hot Springs, Arkansas and back.

If you want to contact our webmaster, use this convenient form. It should not be used for membership questions.